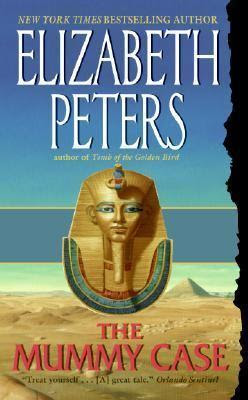 The Mummy Case by Elizabeth Peters

William Morrow, 1985
308 pages
Mystery; Amelia Peabody
Third in series
Source: Library
Summary: Amelia, her husband Emerson, and their son Ramses arrive in Egypt for another season of excavation and end up entwined in webs of murder, thievery, and religion.
Thoughts: I love the style in which this is written. I love Amelia as a character and her descriptions of everything. She is eminently sensible and yet romantic in her relationship with Emerson and she's very smart as one can see by her solving of mysteries.
I was annoyed by the fact that Ramses' speech was written phonetically so that "the" became "de", etc. I understand that he is young and precocious but that kind of thing always bothers me (whether it be French accent represented, Southern drawl, whatever, I hate it.) I was displeased with the attitude that Emerson displayed toward Christians as if they were the only people who ever killed in the name of religion, because um no they are not.
Overall: 4/5 I don't think this was an outstanding entry in the Amelia Peabody series but it will do.
Cover: The cover is okay; nothing outstanding but the blue for the sky is very pretty.
Posted by The Insouciant Sophisticate at 12:01 AM