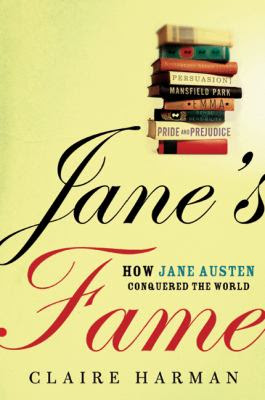 Henry Holt and Company, 2009
229 pages
Non-fiction, Jane
Source: Library
Summary: An exploration of Jane Austen's awesomeness around the world and throughout the years.
Thoughts: I had seen this mentioned and I was so excited when my mom saw it and picked it up for me at the library. Austen is my favorite author, Pride and Prejudice is my favorite book, I am a proud Janeite, and I tend to think that if you don't like her writing, that is a sign of a serious flaw within you.
The first two chapters look at Austen's writing process and her struggles to be published. In the end she spent far more of her life unpublished and when she was published, she didn't earn as much. The next chapter looks at how her books remained unsold and were remaindered by the publisher. While her effect was seen in other books, she was not necessarily recognized as the source for the new style.
It was interesting to read how her books and her life merged together to form impressions in the public's mind because I find that I conflate the books and the various movies in mine. For example, when I choose my favorite Austen hero, it is mostly due to the movies (For the record, it's Mr. Knightley because of Paul Rudd and Jeremy Northam-so charming! Then Mr. Tilney, Captain Wentworth, Darcy (I know, only fourth!), Edward, Colonel Brandon, and Edmond, because he's a loser).
I also am interested in how Austen's books changed from a large male audience particularly surrounding the Great War to a female audience who studied literature because that was "appropriate" for them and how Austen seems to be denigrated as girly nowadays (not always but sometimes). Additionally it gained in critical attention as well as added details to the scanty record of Austen's life we have. Most of those details were patently false but they made for an interesting story.
My favorite part was the conclusion which examined her timelessness and how it was a deliberate process. Unlike other authors who firmly situated their stories in their time, she deleted much of that in order to be able to get her novels published. She meticulously plotted and attempted to keep her work similar time line wise. So while P&P was originally started in about 1796 and Emma 1815, they all seem to take place maybe around 1802.
Overall: 4/5 An interesting read, recommended for all fans of Austen.
Questions: I am wondering who is your favorite Austen hero and why. I would also love to read about why you have chosen your favorite heroine providing it is not Lizzie as she is mine and I have reasons aplenty for choosing her (she's also my favorite character in literature.)
Cover: Kind of boring but I love the font for the title and I like the stack of books.
Posted by The Insouciant Sophisticate at 12:01 AM