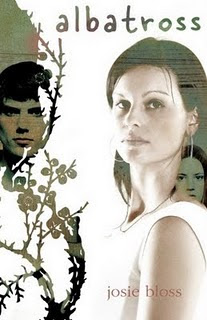 Flux, 2010
229 pages
YA; Contemporary; Relationship Abuse
Source: The library
Summary: Tess has just moved to a new town with her mother, leaving behind her abusive dad. She feels lost and alone at school until she meets Micah, the brilliant and gorgeous guy who soon comes to consumer her thoughts.
*Spoilers ahead*
Thoughts: I had seen several positive reviews of this throughout the blogosphere so when I noticed it at my library, I snatched it up and read it fairly quickly. It is not my usual type of book as it deals with relationship abuse; Tess's dad and Micah emotionally manipulate Tess and physical abuse seemed a definite possibility (actually Micah does bite Tess on the arm). This was actually a pretty hard book for me to read; I felt literally pained reading about her interactions with both of those males and I kept waiting for her to break free (she does!)
When I first saw the relationship of Micah and Daisy, explained by him, I saw them as sort of a Heathcliff and Cathy, definitely one of the most messed-up relationships in literature. But Micah was abusing her similarly to how he treated Tess and she was also able to break free of him. Yay!
My biggest problems were the quickness at which Tess became obsessed with Micah and the relative lack of information about all of the other people in her life. I thought her feelings about Micah could have been elaborated on more before she became so involved with him. I found him rather pretentious and, having read the summary, I could tell he was bad news. I guess I understand that the reader can't know too much about the friends as Tess pulls back away from them whenever they try to warn her about Micah but at the end, they still are ill-defined to me. The book also avoids putting her in a new relationship despite the presence of a new and very nice boy as Tess is mature enough to realize that she is not quite ready for another romantic entanglement and does have issues to work on before being able to be with someone.
*End spoilers*
Note: Albatross comes from "The Rime of the Ancient Mariner" by Coleridge, not the Monty Python sketch like my dad suggested when he saw me reading this.
Overall: 4/5. It was well-written but it is not really my type of book. I would still recommend it and I'm trying to get my sister, who usually prefers more serious books than me, to read it.
Cover: I'm not really a fan of real-life people on covers (I prefer cartoons) but I think the colors are good.
Posted by The Insouciant Sophisticate at 12:01 AM