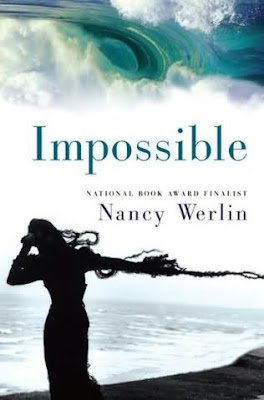 Dial Books, 2008
364 pages
YA
Source: Library
Summary: Lucy discovers that she is another family member doomed to be cursed: she will become pregnant at seventeen, give birth, and descend into madness as her daughter grows up to repeat the cycle unless they can perform three seemingly impossible tasks. But Lucy has something earlier generations didn't have: a loving foster family, notes from her birth mother, and Zach. Inspired by the ballad "Scarborough Fair."
Thoughts: I've been wanting to read this for a while so I was very excited to pick it up at my library. I was not familiar with the ballad but I had seen some reviews around and they seemed largely positive. I'm glad I picked it up because I flew through it.
I really loved the characters; I felt for Lucy as she was struggling to make sense of everything. I loved her foster parents Soledad and Les who were so loving to her and supportive. I liked her (basically only) friend Sarah. And I liked Zach...
In fact I think Zach is a big part of my happiness with this book; he sounds super hot and is basically just a fantastic guy as evidenced by this quote: "...who had just told her she was competent to take care of herself, but who was still there to hold her up anyway" (116). He knows that she is strong and can take care of herself but he still wants to be there along the way to help her if she stumbles and to love her when she needs it and to watch her be awesome.
The tasks set to Lucy were quite difficult-I'm still not entirely sure how she completed the first one but it doesn't really matter because in the end "True love conquers all!" (Does anyone else sing this like they do in Sleeping Beauty?)
The villain, the man who had placed the curse on Lucy's family, is suitably creepy and I felt dread when he showed up because obviously nothing good was going to happen but I also felt drawn to him like the characters in the book do because he had that magnetism.
Warning: There is a brief rape scene, which is obviously horrifying.
Overall: 4.5/5. I'm not sure this deserves this high of a rating but it was so much better than some of the other stuff I've read this week that this is more of a immediate reaction; later on I may feel it is more deserving of a 4.
Posted by The Insouciant Sophisticate at 12:01 AM