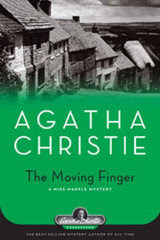 The Moving Finger by Agatha Christie

Black Dog & Leventhal Publishing, 1942
201 pages
Mystery; Miss Marple
Source: Library
Summary: Jerry Burton and his sister Joanna have moved to a small, quiet, and peaceful town in England to ease his convalescence. What they get though is a small town rife with secrets. A mysterious writer is sending nasty anonymous letters to people which culminates in a local lady committing suicide. The next week, a maid is killed. Are they connected? Did that maid know something about the killer? Christie weaves another fine tale.
Thoughts: Despite this being a Miss Marple, she doesn't appear until more than half way through the book, meaning we hardly get to spend any time with her. She is called in as an expert on humans by the vicar's wife. She figures it out and sets up a trap to nab the murderer.
It was interesting to me how the narrator Jerry Burton drops explicit hints to the reader, saying that certain things turn out to be important and how he could have solved the mystery earlier had he paid more attention. I did take notice and I still didn't figure it out; I read Miss Marple's explanation and it still didn't help me very much. But I liked this and I enjoyed the little romance. I know Christie is a mystery writer and she frequently writes the most awful things about women as if they were facts that apply to all women but she writes cute romances. She couldn't sustain an entire book with them but as a garnishing to the mystery, they work well.
Overall: 4/5. Could have been higher if there had been more Miss Marple
Cover: My cover is the same cover but the picture is of a door rather than a town.
Posted by The Insouciant Sophisticate at 12:01 AM