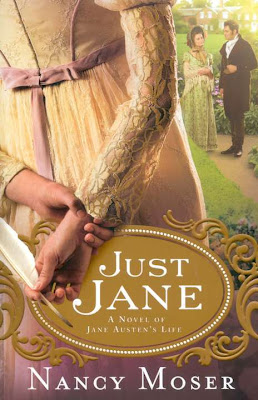 Bethany House Publishers, 2007
352 pages
Historical fiction; Inspirational
Source: Library
Summary: An imagining of Jane Austen's life following her from her early writings to her death.
Likes: I LOVED Cassandra and the relationships Jane had with other females in her life. Cassandra is an awesome sister and a friend to future generations as portrayed here because she encouraged Jane to write, write, write throughout their lives. Unfortunately Cassandra also burned what were probably some very enlightening letters written by Jane but book>letters so I can forgive her for that.
I like the connections between her life and her fiction (I always like seeing that when I read about an author).
Dislikes: Repetition of the phrase "Just Jane," it was cute at first but then it kept repeating and I felt like the author was hammering it into my head.
While inspirational and having some references to God, there are not as many as I would have liked, thus you could probably share this with a non-Christian friend who is interested in Austen. However, recommend at your own discretion because it's not written at all like Austen and in the Bath sections, Austen seems whiny and is very unsympathetic.
Lastly I was confused about the relationships-it seems like British people during the Regency all had the same names especially within families ("Remember, like, a few years ago, every other boy was named Jason, and the girls were all named Brittany?" -Hercules).
Overall: 3/5. I know this is the second in a series looking at the lives of famous women (the first being Mozart's Sister and the third being Washington's Lady) so if you liked Moser's style in those books, you'll probably like it this one. I was unimpressed and am unlikely to seek out more of her work.
Cover: I like the colors and it's a fine cover but it's not spectacular.
Posted by The Insouciant Sophisticate at 12:01 AM