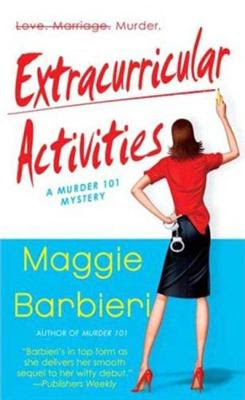 St. Martin's Minotaur, 2007
294 pages
Mystery; 2nd in Series
Source: Library
Summary: Wow-Alison's life is complicated! Her best friend is getting married to her married-but estranged from his wife-kind of boyfriend's cop partner; she's under stress at work; her other best friend is trying to set her up with his brother; and her philandering ex-husband is found dead in her kitchen. Again she is dragged in to solving a mystery!
Thoughts: I read the fourth book in this series a while back so I was pleased to be able to pick this up (review of the third book tomorrow). I also have to say a. I am so jealous of how tall she is, even as I recognize potential pitfalls; and b. they drink a lot in this book-it seems like every chapter has her imbibing at least one drink and frequently more.
I don't remember this in the fourth book but this is told in alternating perspectives; first person for Alison and then third person following Crawford. It also explains how she gets Trixie who is a faithful dog in the fourth book but was not originally Alison's. It's pretty interesting to see certain plot points which will lead in to the fourth and then fifth book.
I was a little confused about the mystery itself (I actually somewhat figured out the culprit-I speculated it could be the person but I didn't definitively say it was). The mystery didn't seem to be as important as Alison trying to figure out her relationship with Crawford and since I know it works out, I didn't really care. Furthermore I didn't really care about the murdered people although I did want justice for them.
Overall: 3.5/5
Cover: I love her heels! And this outfit is basically described in the book so points to the artist for accuracy!
Posted by The Insouciant Sophisticate at 12:01 AM