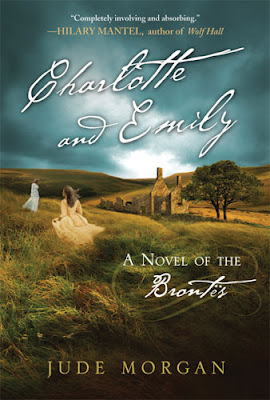 Charlotte and Emily by Jude Morgan

Also known as "The Taste of Sorrow" in the UK
St. Martin's Press, 2009
373 pages
Historical fiction
Source: Library
Summary: A literary treatment of the lives of the Brontes with special focus on Charlotte as the longest lived.
Thoughts: This is the Bronte book I most wanted to read when I signed up for the Bronte challenge so I'm glad it finally came to the states and that my library owns it. I am not a fan of the title (there are THREE author sisters! and there was a lot of sorrow in their lives making the original title appropriate) but the title doesn't really matter.
Focusing on the plot I was so angry about treatment of Branwell versus the girls by their father; of course the boy is supposed to succeed while the girls are practically useless!! It just made me really angry how Branwell was petted and beloved while the girls were disposable. It was also devastating how Mr. Bronte outlived his wife, his sister-in-law, and all of his children.
I was most interested in the chapters which overlapped the period of Sheila Kohler's Becoming Jane Eyre (which I reviewed here) and it used the same technique of shifting perspectives in order to better understand their point of view.
Overall: 4/5. Fantastic from Morgan as always but not my favorite subject matter.
Cover: I like the covers and the font of the title.
Posted by The Insouciant Sophisticate at 12:01 AM