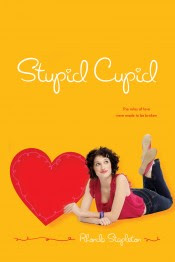 Simon Pulse, 2009
244 pages
YA; Contemporary
1st in trilogy
Summary: Felicity applies for and gets a job as a cupid. She is assigned to match up couples in her high school. This starts off well enough but when she matches her friend Maya up with three guys (a big no-no), things could turn ugly.
Why I Read: I had seen some reviews of it and I liked the concept.
My Thoughts: I don't know if I've read too much YA lately or if I'm becoming blase but I found this rather predictable and the main character very aggravating. Her attitude toward her job was infuriating-she didn't follow the most basic instructions, she didn't try to read the manual all the way through, and she was very lucky that her boss did not figure out her deceptions and that nothing was ruined through her actions.
On the bright side, I really liked Maya who is torn between three guys because each of them have a little bit in common with her and is unable to make up her heart. I liked Felicity's parents and am interested to learn more about her brother who was very loosely drawn. Then there is their other friend Andy who I think will be matched with someone in the second book. And her crush Derek sounds okay, although he reminds me of Derek from The Swan Princess (not necessarily a bad thing).
Overall: 3.5 out of 5 for an annoying heroine but fun concept and likeable supporting cast.
Cover: I think the cover is cute-simple but eye catching.
Posted by The Insouciant Sophisticate at 12:01 AM