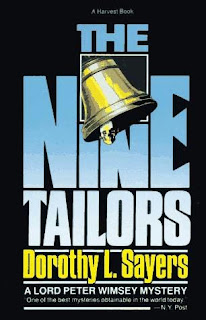 Harbrace Paperbound Library, 1962
Originally published 1934
310 pages
Mystery; Series
Summary: Another Lord Peter Wimsey mystery involving campanology and the intricate happenings of a small town.
Thoughts: I actually had meant to request Nine Coaches Waiting by Mary Stewart but somehow I mixed the two up (hey they both have nine in the tile and I had prioritized both!) I enjoyed the short stories I read earlier in the year but I felt that the mystery was not necessarily a priority to the Lord Peter stories; instead character takes preference. I also thought the title referred to the trade but it is actually about bells as you can tell by the cover.
I had a lot of trouble with this book-the mystery was somewhat confusing (and, no I didn't solve it). To be honest, I don't even feel up to summarizing this book hence the short sentence. There was WAY too much about bell-ringing and the workings of the Church of England. Perhaps if you lived during that time and were involved in one or the other, it would have been interesting to you. According to the internet, the method of death could not have occurred but I don't know much about that.
I did enjoy hanging out with Peter some more though and I wish there had been more Bunter, his butler. He's so deliciously dry! The rector of the place was also delightful in his absentmindedness and relationship with his wife. But I didn't care that much about solving the murder mystery which is not good for a mystery story.
Overall: 2.5 out of 5. Very disappointing but it will not stop me from reading the others.
Posted by The Insouciant Sophisticate at 12:01 AM