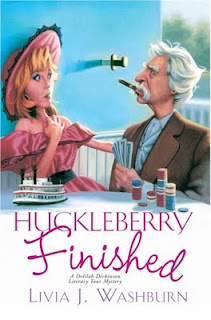 Kensington Books, 2009
243 pages
Mystery; Contemporary
2nd in Series
Summary: Delilah Dickinson has continued her tour guide business even after the disaster in Atlanta. This time she is going on the Mississippi with Mark Twain. But again someone winds up dead and many secrets are at play.
Thoughts: I enjoyed the first book but I wasn't in love with it so I was hoping to really love the second. I enjoyed it but again it was not as gripping as I wanted it to be and I didn't care that much about figuring out the murderer. I did not figure out the murderer or the various mysteries and I actually had to reread the chapter again to make sure I fully understood it.
I mostly like Delilah (I'm not a fan of her usage of "y'all," one of my least favorite colloquial phrases). I liked the detective who comes out to investigate the murder, no-nonsense Detective Travis. I loved that there was a character named Eddie (inside family joke).
I loved the bits of Mark Twain trivia as well as quotes from him (my friend and I were really into him in seventh grade so this brought back fun memories.)
Overall: 3.5/5 Not bad but I'm not overly enthusiastic about it. For example, even though it's fairly short I kept checking to see how many pages were left until the mystery was solved.
Posted by The Insouciant Sophisticate at 12:01 AM