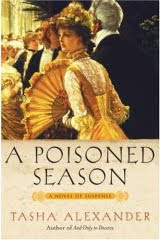 A Poisoned Season by Tasha Alexander

William Morrow, 2007
306 pages
Mystery; Historical
2nd in Series
Summary: While the big gossip of the season is surrounding the purported heir to the French throne, Lady Emily Ashton is still attracting attention. She is still studying Greek, still refusing to remarry, still drinking port, and still intent on being her own person even as she faces society's censure, troubles with her best friend, multiple proposals, a dashing thief, and a murderer.
My Thoughts: The characters are the most important part of this story so I will start with them (I'm afraid that I'm assuming you've read the first book and are familiar with them.) Emily is still lovely and Colin still sounds hot. He is very determined to marry her and a bet around that emerges. My personal favorite character is Davis, her butler. I love him and am very jealous of that French tart Odette who captures his attention. Cecile is not in this book as much but Ivy and her marital problems move closer to the front. On to the mystery.
Throughout the story Emily is threatened by some very bad people. First there is Charles Berry, claiming to be the heir to the French throne, who believes he is irresistible to women. Then there is a mysterious thief who brazenly breaks in to her house and follows her. I did not quite unravel the threads of the mystery. There is involvement by a person who I did not suspect because I am far too trusting of fictional characters. I felt it was more substantial than the mystery of the first book though.
Overall: 4 out of 5. Very good. I'm hoping to read the rest of the series over the summer!
Review of first book: And Only to Deceive
Posted by The Insouciant Sophisticate at 12:01 AM