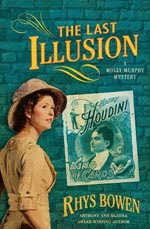 The Last Illusion by Rhys Bowen

Minotaur Books, 2010.
279 pages
Series; Mystery; Historical
Summary: The ninth book in the Molly Murphy, Lady Detective series. Molly is an Irish immigrant in NYC circa 1903. She is engaged to policeman Daniel Sullivan and in this installment is investigating mysterious happenings surrounding the magician Harry Houdini.
Why I Read: I've read many of the previous Molly books and I had not even realized there was a new book so I was very excited.
My Thoughts: While it was mostly enjoyable, I had a few problems. First I'm very angry at Daniel for his "maleness." He keeps insisting that Molly will give up her detective agency when they get married; but then the series will be over! :-( I don't want that to happen. Then, and I realize this is a minor problem, there were multiple times when it was said that theater people sleep late. I don't know why that had to be repeated so much!
I also figured out some aspects of the mystery although not quite everything. I liked the way everything intertwined and the new character Wilkie (I can't explaining why without spoilers). I liked the Houdinis as portrayed by Bowen; obviously it's difficult to discern how accurate the personalities are of historical figures but I hope these are somewhat true.
Overall: 4 out of 5. I was disappointed but it was still good.
Cover: I do like the cover: the colors, getting to see Molly as flesh and blood.
Posted by The Insouciant Sophisticate at 12:01 AM