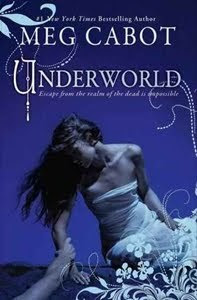 Source: Picked up at library for review

Last year I read the first book in this trilogy Abandon and found it to be a more a return to form for Cabot after being disappointed with several of her books. Thus I thought I would be easily swept away by this sequel, no matter the other people who were disappointed.

Alas that was not to be. The book opens with Pierce in the Underworld with John Hayden, with the pair assuming the roles of Persephone and Hades in their famous myth. However I doubt Persephone has the neuroticisms of this typical Cabot character. Boy is Pierce a bundle of them and they're all so familiar to me as a long-time reader of Cabot. I honestly think that is my big problem. If I was coming at this with fresh eyes, I probably would have been charmed. But as it is, Pierce reminds me of other Cabot heroines I like more and thus I find her boring and frustrating.

Another problem is the constant miscommunication between the couple. Each hints at something and the other misunderstands and reacts based on that misunderstanding. I don't get why people can't just say things out in the open. The reader basically knows what is going on and, at least in my case, gets super frustrated with the annoying people. Plus I'm not entirely sure when they became boyfriend/girlfriend, a term that seems a bit unsatisfactory when you consider that neither will be able to leave the Underworld for any extended period of time ever again. Pierce was debating whether to stay but then all of a sudden, she's committed. I just don't see when that happened.

Saying that, there were some cool secondary characters in the Underworld who have known John for ages and who added a lot of color to the story. This is also good as most of the characters I liked in the first book only make brief appearances here. I also liked getting to know some more about John's duties and how he got to that point. But the interplay between the main couple and actually almost everything involving Pierce drove me bonkers.

Overall: A lot of talking without necessarily a lot of understanding, ending with a cliffhanger.

Cover: I do quite like this cover; I read a bit about how it was made and thought that was so cool. I also love the dark blue/purple colors.