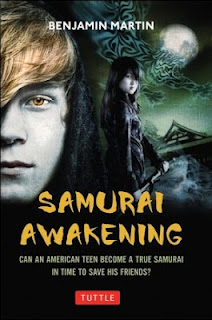 Source: Received an e-ARC via the publisher in exchange for an honest review.

After reading Stormdancer, I was in the mood for other stories set in Japan, happily chancing upon this one while browsing. The title was definitely appealing although the cover doesn't do anything for me. Perhaps it will appeal to youngsters?

The first surprise for me was that this book was not narrated in first-person. This is especially surprising to me as the book continued and there were a lot of scenes where I think diving into David's head would have given me more insight into him as well as cleared up confusion about what exactly was happening. The third-person narrative felt more formal to me and less engaging so I was ultimately pretty disappointed with that.

The second surprise (because I didn't really read the synopsis) is that this book is about an American thirteen year old doing an exchange program in Japan (without speaking a word of Japanese-how did the organizers let that happen?) who is selected to be something incredible. There are so many things in that sentence! I really can't believe they let a thirteen-year old do a foreign exchange program without being able to speak the language; I think it's too young and quite frankly irresponsible. He was barely passing his classes. Next I was not sure what was so special about him that he was chosen-he has a good heart, true, as well as a strong work ethic but I don't know why someone in his host family couldn't have been selected. And I sometimes felt very protective of him and his host siblings (all thirteen). They were so young and I feel like I would have been more comfortable had they been a bit older (say, sixteen).

But a third cool surprise was all of the mythology and history included. Martin has studied Japanese culture extensively according to his bio and Tuttle Publishing has been focused on Asia-set books so if you're looking for something for a young person to read that has accuracy, this might be good for them. I could definitely see it being a read for school.

Overall: Decision to narrate in third person kept me very disengaged with the text as I crawled through it.