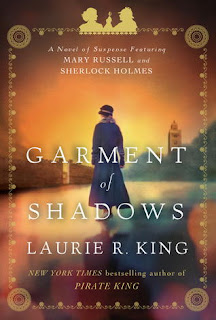 Last year I dove headfirst back into the Mary Russell series with Pirate King and enjoyed becoming reacquainted with the delightful Mary as well as liking the lightness in the exploration of the British film industry in the 1930s. This time I was promised a novel of great suspense with Mary and Sherlock each racing against time in a perilous situation, picking up almost immediately after the conclusion of Pirate King.

Mary wakes up alone, covered in blood, and unable to remember anything; yes, she has amnesia. She soon begins wandering the streets of a Moroccan city and trying to piece together the few things she can remember. Meanwhile Sherlock, not having heard from Mary for some time, begins a search for her while also being drawn into a distant French cousin's political difficulties with the Moroccan population. The way Sherlock's two aims were balanced and then eventually intertwined was very pleasing. As ever Mary and Sherlock are delightful characters and die-hard fans will be pleased to return to the world. I especially enjoyed the denouement when everything was explained to me and the villain(s) of the piece exposed.

However I missed the lightness of the previous books, which more closely aligns with my preferred reading style, and I struggled with a lot of the political conflicts. There are French, Spanish, and Moroccan interests on the ground but the British and Germans are not idle. Various agents of all play roles and I sometimes had difficulty keeping it all together. For people who know this time period and place, it might make more sense. I am also not sure that you would want to start with this book if you haven't read the series yet. I found some elements disorienting and I've read previous books.

Overall: A novel replete with espionage and secrets as well as plenty of descriptions of both the urban and rural side of 1930s Morocco.

Cover: I think it looks very mysterious with the woman in her long coat and the colors sort of melting in the foreground.