Emily's Dress and Other Missing Things 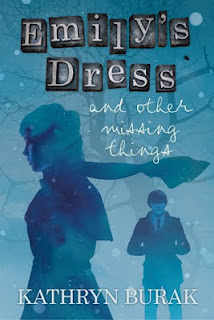 
Claire has been through so much that she’s pared her life down to one goal–to get out of high school (finally)–until the night she wanders into Emily Dickinson’s house and finds everything suddenly changing.

Claire, new to Amherst and desperate to get out of high school, vows she’ll try to be invisible. She retreats deep into thee poetry of Emily Dickinson to help her understand her mother’s suicide and best friend’s disappearance, until one night, when she finds herself running through the woods in the poet’s dress. The next morning she starts a different life, one with totally new complications.  -goodreads

I picked up this book with pretty high expectations. I love mysteries and have enjoyed seeing more pop up in the YA genre; I have liked books from this press before; and the ratings on goodreads are pretty high. However the book I read did not quite align with those expectations. I would say this is very much a case of book not meshing with reader.

That would stem largely from the writing style, which I found very confusing and distancing. I admire the poetry in it (and indeed there is a mix of poetry from I believe Emily Dickinson and the author's own construction) with the prose but it is very much not to my taste. Additionally there is a surreal blending of the past and the present, which only gave me more confusion. I guess I expected a more straightforward story and it took me nearly half the book to feel situated in what was occurring.

As for the titular "missing things," we have Emily's dress, actually accidentally stolen by Claire who sneaks into Emily Dickinson's house some nights to cope and ends up running out while still wearing the dress. Other missing things are Claire's best friend Richy whose disappearance heavily impacted Claire and Claire's mother, whose suicide haunts the family still. I thought the mystery around Richy was the part that worked best for me. After a year, Claire puts herself to the task of solving it and does so to my delight.

Part of the way she solved it was through sharing her grief in writing to her English teacher and a student teacher. The latter pushes her on it and they sort of develop a romance. He's a junior while she's a second-year senior, having needed to repeat after losing Richy. I think this is supposed to make the age difference more palatable but it did not appease me. For those who do like romance though, Claire's father receives a paramour and good for him to go after some happiness after years of mourning.

Takeaway Points:
1. Poetic writing that is not my cup of tea
2. Mystery was by far most satisfying aspect
3. Icky romance for MC but cute one for her father.

Emily's Dress and Other Missing Things is scheduled for release October 2, 2012. This review is based on an e-ARC received from the publisher through Netgalley in exchange for an honest review.