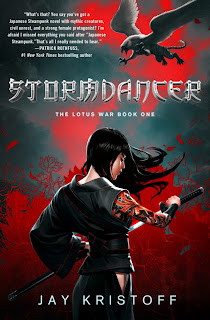 This has been one of the most anticipated books of the fall, I would say, capturing the attention of the YA community from what I can see despite it being technically an adult novel. All of this buzz of course had me intrigued so I was pleased to receive a copy, hoping to add my voice to those praising it.

Unfortunately I did not immediately fall into the world. This was partly because I was sick when I started and my attention span was limited but also due to the writing style. The first chapter is set toward the end of the story and just drops us into it but then the next chapter goes to the beginning introducing a flurry of characters and the world-building. The setting reminded me of Masque of the Red Death by Bethany Griffin, where pollution has destroyed the earth and the air. The wealthy wear masks; the poor deal with kerchiefs and goggles to protect themselves from the filth.

But the plot is vastly different: basically the all-powerful emperor wants a griffin, an arashitora so that he can be a stormdancer like mythic emperors of yore. Problem is that they are presumed extinct due to that pollution that is destroying the earth. However his royal hunter dutifully sets off bringing along his companions including sixteen-year old daughter Yukiko who was introduced in that confusing first chapter. They do manage to find, capture and clip the wings of one during a storm but their ship goes down, stranding Yukiko with the griffin who she names Buruu and presumably leaving everyone else dead. Now the pair have to band together in order to survive.

That's the beginning but the book still has more plot to reveal, following fairly predictable paths. I wasn't super surprised by any of the twists the book took but I think the real strength is supposed to be in the world and characterization. Due to my struggling with the writing, I didn't get much of a sense of that in the first half. Fortunately as the book continues, the story moved into the forefront and the writing was less confusing. I especially ended up loving the emperor's sister Lady Aisha with her beauty and kindness.

There is also a very lackluster romantic love triangle. Yukiko lusts after one guy who was nothing special as far as I could see while a second languishes in the background.  I would have been okay for Yukiko to have no romance but to have such a disappointing one kind of wrecked that whole angle.

Overall: Confusing writing style slowed my entry into the world but compelling characters kept me going.

Cover: I love seeing the griffin and the reds although I wish Yukiko got to be wailing on someone instead of being poised to inflict massive violence.