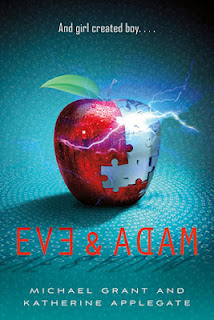 Why did I read this? Well just look at the cover. It is simply stunning in my opinion. Plus the synopsis sounded cool and I'm always up for some science fiction. I am also a sucker for alternating narration.

We are introduced immediately to Evening, usually called Ev, beign hit by a car. Then her terrifying mother Terra Spiker, business mogul billionaire, insists on Evening being moved to Spiker's medical facility...and for good reason as it runs out (I'm not going to spoil it here). However this move does not work out quite the way Terra planned as Eve meets Terra's ward Solo (immediately invoking Star Wars for me). Solo is an orphan whose parents died, accidentally in a car accident but also possibly on purpose as they were former business partners who crossed Terra. Thus Solo waits and bides his time until falling for Eve and inviting her into his plot.

For her part, Eve is preoccupied with her friend Aislin who has the worst taste in guys leading to several exciting action scenes in addition to an order from her mother to create the perfect man using experimental technology. Eve creates a guy, suitably dubbed Adam. I thought the sequences around the genetics were fascinating. Although I'm not a science person, I have always had an interest in that branch and enjoyed the brief time spent exploring it.

Due to the alternating perspectives, I thought the book moved quickly through its story with each chapter leaving me wanting more. But the characters really slowed me down toward the end. I liked Eve for the most part although I got pretty mad at her toward the end for her treatment of Aislin who did not deserve that. Unfortunately I was less enamored with Solo which, as I observed in a goodreads status update, made some sections of the book difficult such as his burgeoning feelings for Eve and her reciprocation (I do not get what she sees in him). Also as an "older" reader, I often find myself more sympathetic to the parental figures in a book. This was actually such a case. I thought Terra was being demonized and felt somewhat justified in those feelings as the book reached its conclusion. She's not a great parent by any means but she's not the awful person originally presented.

Takeaway Points:
1. Cool sci-fi concept and discussions
2. Fast paced read kept me turning the pages
3. Villain mother was ultimately more sympathetic to me than so-called hero. This clash of assessments with how the authors' presented them ends up being the main reason for my 3 star rating.

Eve and Adam will be released on October 2, 2012. Click here for more information. This review is for an e-ARC provided by the publisher through Netgalley in exchange for an honest review.