From What I Remember 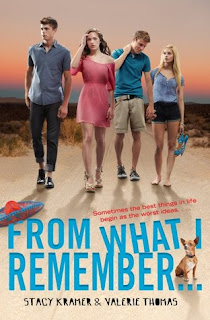 From What I Remember...by Stacy Kramer and Valerie Thomas
3.5/5 stars
Hyperion, 2012
462 pages
YA Contemporary Multiple POV

Source: Picked up from library to review.

After seeing Mimi Valentine's enthusiastic endorsement (and realizing it was told from multiple perspectives, something I adore), I resolved to give this book a try so I reserved it and then picked it up from my library. Weirdly though I got a sense of foreboding from reading the front inside cover that maybe I wouldn't like this book. I can't explain it but it was there. And by the end I knew why.

This is a fun book with a lot to like. It's breezy and moves pretty quickly. The basic plot is that Kylie and Max wake up in Mexico and have to remember how they got there and figure out how to get back for their graduation in San Diego. There is a lot of action that would translate well to the big-screen, evidence of the writers' background in screenwriting. I love the snappy quotes from movies that begin each chapter; all are relevant and it was fun figuring out how that would be. The two main narrators are Kylie and Max but I thought the side characters really stole the show. One is Jake, Kylie's younger brother with Asperger's Syndrome who is obsessed with the San Diego bus schedule. The other is Will, Kylie's only friend whose cross-dressing tries to shake up their staid private school and encourage other students to join him out of the closet.

But they were only secondary characters. Our main narrators are Kylie and Max, the good girl and the bad boy, a dynamic I'm really sick of (not that I was ever a big fan to begin with.) They both had some big hang-ups-Kylie worries about her standing at school, how her family will function when she's at college, and feeling like she's not pretty. Max is aware that he's often a jerk and is putting his passion second to what he thinks his dying dad wants. And these things were repeated...a lot, making what is already a long book feel even longer. Plus their flirtation just did not work for me, which is unfortunate because it takes up a lot of space.

Then there were the three uses of "retarded" that I caught (may have been more). I have a really hard time believing that someone whose brother has Asperger's and has possibly been called a retard before would be so casual using the word with all of its hurtful connotations. More content problems were the rampant drinking and language-this is not a clean book by any means. In fact, there is a lot of drinking, I mean a lot because that is apparently how high school kids celebrate their graduation nowadays?

Overall: These particulars brought down the book's stars for me but they may not bother you.

Cover: These people could be more disheveled and Kylie could be curvier but it's an alright cover.