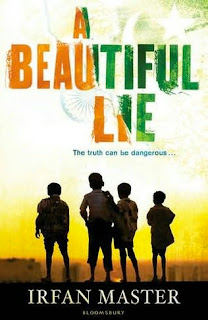 I was first captured by the title; given my stance against lying, what could be beautiful? Then I was sold once I found out it was set in India-that was literally all I needed to know to request. Upon opening the book up, I discovered that it was set in 1947 with rising tensions as India is partitioned into India and Pakistan, with most people choosing their ultimate location based on religion (Hinduism and Islam respectively), such tensions continuing into today.

I really don't know much about that history at all so it's good that at the center of the story is a young boy with an immensely appealing voice, insightful and respectful. His father loves India and it would break his heart to discover its pending separation and the anger within so because he's dying, young Bahil decides to hide the truth from him. This instantly reminded me of the German film "Goodbye Lenin!" where two young people hide the fall of the Berlin Wall from their mother. Since I liked that film, I figured I'd enjoy this book too.

I was right. Bahil comes up with the idea pretty early in the book and recruits his three best friends to aid him in protecting his father from outside sources. Soon many other people in the village are drawn into the lies, amid ever increasing tension and the unstoppable partition. Bahil is a sweet and sensitive boy who immediately gained and retained my sympathy. I found the ending very poignant and I'll admit that I cried. This was my favorite read of August and I think you'll see why if you give it a try.

I would have liked a bit more about the conflict between Muslims and Hindus; I felt like the author assumed that the reader knew more than this reader knew. It just prompts me to do some more research but I wish some page time could have been devoted to filling in a few more facts.

Overall: An amazingly emotional story with a strong protagonist and surrounding characters.

Cover: I like the green and orange-beautiful colors that also bring to mind India and Pakistan's flags. The four boys represent Bahil and his best friends.