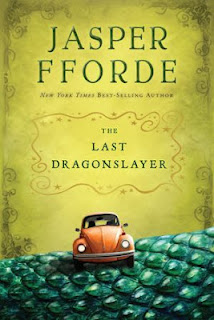 While I love Jasper Fforde's writing, I entered this book with a bit of a grudge. Not because I don't like his stories but because I've been waiting for the sequel to Shades of Grey for over 2 years and every book that is released in that time but is not the sequel has left me frustrated. Now it looks like that sequel is finally coming out in 2013 and you can expect an excited review upon release.

Back to this book, if you have enjoyed previous Fforde books, I bet you will like this one. It has that same quirky writing style and a lot of funny moments. I believe this one has been labelled YA because the main character Jennifer Strange is only fifteen (but soon to be sixteen) and it is perhaps less dense with literary allusions as say the Thursday Next series. Regardless, I think adults will still find plenty to enjoy as it is very typical of his writing while also being its own fun story.

In this world, magic used to be abundant and useful for many things but unfortunately magic seems to be running out, causing a problem for Jennifer Strange running Kazam, an asylum of sorts for wizards, which is in dire financial straits. But the prophecy of a dragon dying unleashes a crazy chain of events that is best read.

Jennifer is an appealing character: ethically sound, honor-driven, and brave to the point of crazy in my opinion. I really enjoyed hanging out with her during this book. Most of the other characters are lovably or frustratingly eccentric as Jennifer is the grounding force at the heart of the story. The way everything ties together is perfect and yet not what I predicted, thank goodness-it's a much better ending than I anticipated.

Overall: Great fun-it looks like a sequel has already been published in the UK so I hope it's brought over here too as I definitely want to read it. In short, if you like previous Fforde works, I think you'll like this one too. If you haven't read any previous Fforde works, this would serve as a fine introduction especially for those who enjoy dragon stories.

Cover: Since I read this based on previous experience with the author, I didn't look very closely at the cover. However I really appreciate seeing the dragon's scales and the car is present in the book.