What Came From the Stars 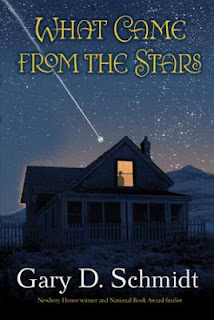 After adoring Okay For Now, one of my top reads of 2011, I was excited to see another book from Schmidt and eagerly requested it. I was thrown by a loop to see that it was not a straight contemporary but I wanted to see it through despite the inclusion of fantastical elements. Unfortunately it ended up really not being what I wanted. For my review, I want to divide it into two parts: one for the contemporary and one for the sci-fi sections. The book is also roughly divided into that with italicized chapters detailing another world and regular font for our world although the two increasingly overlap as the book progresses.

Let's start with the contemporary, which I loved. Sixth-grader Tommy lives with his painter father and bubbly younger sister after the death of his mother. Unfortunately the father no longer paints and the sister no longer speaks due to grief even as their house is under assault by a mega-corporation eager to snatch up its land and develop it. Amid this melancholy, Tommy receives a chain from Valorim and soon finds himself speaking its language to the bafflement of his classmates and embarking on its defense. I loved just about everything that was realistic in this book-the sad family attempting to move on without a vital part of itself, the kids at school as well as their teachers and staff, Tommy's battle against the realtor. It was great stuff!

But the fantastical elements were SO hard for me. I dreaded every time I reached a chapter set there (they alternate). There are many made-up words, which are included in a glossary in the back, but they never fully sunk in to my brain so even as I approached the end, I had to keep flipping to check on their meaning. Then there was the fantasy world itself; I understood its basic conflict with evil Lord Mondus using treachery to gain power but I was a little confused on the names of the people around him (were the Valorim and the Ethelim the same people?) I got a very Lord of the Rings vibe from this part with the way names are deployed except that I love LOTR and did not care for this.

Overall: I did not want Schmidt to try something new and was very thrown by the science fiction elements to the point that they distracted me from the overarching themes of the story.