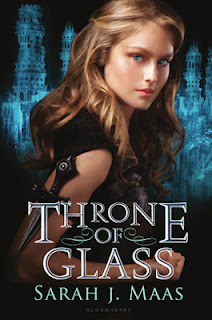 Source: Picked up from the library for review.

This was one of my most anticipated books of the year, even garnering some comparisons to one of my favorite books Poison Study by Maria V Synder in some positive reviews. Girl assassin competing with some mysterious magical powers being riled up? How awesome does that sound? However then I started reading some of the negative reviews and I became anxious. This anxiety increased as I read and instantly saw where their criticisms were coming from.

First Celaena is both immensely cocky and incredibly annoyingly inconsistent. As the most infamous assassin, she was sentenced to labor in salt mines for the rest of her life. However she is pulled out to serve as the Crown Prince's entry into the brutal king's competition to find a King's Champion. In the first few pages, she brags about how great she is at killing, admires the looks of the Crown Prince despite his family being the reason she's stuck in chains, and is rude to the Captain of the Guard who doesn't answer her stupid questions AND then is rude to him for not answering her much more stupid questions. It doesn't let up. Celaena dismisses her competitors based on appearance and then bristles that they are all dismissing her on appearance-um, what? She is given pretty free reign despite her own confidence in being able to kill whoever-if I'm in power, I keep dangerous people much more securely watched over. And I don't let them wander the kingdom at will even if they are supposed to kill people under more orders; I did not get why the king thought this was a good plan.

But the worst part for me was a complete eye-roller when a character has his first kill despite being in a position where he almost certainly should have had to kill people before. This happens later in the book when I had somehow managed to have some sympathy for Celaena although I still struggled.

Because actually I lied, the worst part was the romance as both the Crown Prince and the Captain of the Guard somehow fall for Celaena with her experiencing some conflicting feelings in return. I know who I like more (Chaol) but I'm not really comfortable with either of them involving themselves with her nor was I comfortable with all of their actions around her nor their simmering jealousy of each other over her. Since the two men are best friends, a romance will stir up big problems.

Although Celaena is at the core, there is also some ancient magic stuff going on. This is dark and scary and thoroughly enjoyable. When Celaena was investigating that, I found myself much more engaged. But it's more toward the end, so if you DNF early, you won't get to see the parts that helped to partially redeem Celaena.

Overall: An abrasive main character will probably be the deciding factor in how much you enjoy this book. I also recommend lowered expectations as it is definitely not like Game of Thrones and its epicness as well as a high tolerance for love triangles. I am kind of interested in checking out the prequels since I heard they were better but, well, I like when the prequels are free and these aren't.

Cover: I think the cover model looks rather a lot like the author picture we see. One element I didn't notice at first is the dagger on Celaena's arm-something that adds a lot more danger.