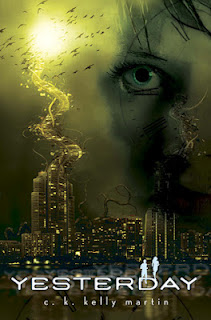 Hmm...this is a difficult review for me to write as I'm pretty neutral about C.K. Kelly Martin's latest offering. I've seen some of her other books around and was thrilled to grab this new one. But while the words tend to flow when I have specific praises or criticisms about a book, they dry up when I have neutral feelings about a book, which is the case here.

I do give Martin props for her writing, which helped lift a middling tale in my opinion. Some elements of the book felt very familiar. For example, the book starts in the future with a rebellious daughter, difficult relationships with parents, and the pending threat of government security. But then there are the more unique elements, like the fact that the girl Freya wakes up in 1985 having received a mind wipe that was unfortunately ineffective. During the parts where Freya can't quite remember, this is a strong realistic fiction offering. Then she sees a guy and realizes that he means something; this remembrance sets them off on an adventurous path to uncover the truth.

Gosh, I even feel lackluster sharing that part of the plot. I think one of my problems is that we are left wondering about the specifics of Freya's remembered life but we already know the basic outlines from the prologue. I wonder if this could have been a stronger entry had the book just opened with Freya in 1985, struggling to remember something that is just not right about her life. Then once she does remember, we have a massive info-dump chapter. I am someone who has a high tolerance for that and I kind of liked having some of my guesses confirmed as well as having Martin's vision for the future elaborated upon but it does freeze the book while all of that information comes out.

Another problem for me was the romance. Freya had feelings for the guy Garren in their future and those feelings are not dormant in 1985. But since I didn't feel much for either character, I didn't care for the romance. I also tend to find it weird that they can focus on that while being hunted and chased but I guess that makes it all the more important to cradle and fight for what really matters.