Back in July, I received notice about a book being promoted by Virtual Author Book Tours with the following blurb:

Sixteen-year-old Sulan Hom can't remember life before the Default-the day the United States government declared bankruptcy. As a math prodigy, she leads a protected life, kept safe from the hunger and crime plaguing the streets of America. She attends the corporate-sponsored Virtual High School, an academy in Vex (Virtual Experience) for gifted children.
Beyond the security of Sulan's high-tech world, the Anti-American League wages a guerrilla war against the United States. Their leader, Imugi, is dedicated to undermining the nation's reconstruction attempts. He attacks anything considered a national resource, including corporations, food storage facilities-and schools. When Sulan witnesses the public execution of a teenage student and the bombing of a college dorm, she panics.
Her mother, a retired mercenary, refuses to teach her how to defend herself. Sulan takes matters into her own hands. With the help of her hacker best friend, Hank, Sulan acquires Touch-an illegal Vex technology that allows her to share the physical experience of her avatar. With Touch, Sulan defies her mother and trains herself to fight.
When Imugi unleashes a new attack on the United States, Sulan finds herself caught in his net. Will her Vex training be enough to help her survive and escape?

I was intrigued and responded with a request to be part of the tour. Soon I received my date and my copy of the book and set about reading. 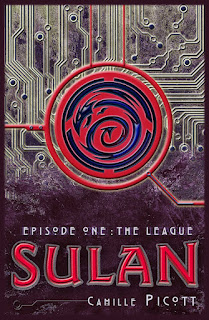 Source: Received as part of blog tour in exchange for an honest review.

As I said, I liked the sound of this book but once I actually picked it up, I struggled a bit. Sulan wants desperately to be a warrior, to have fighting skills and I've always been a bookworm so I did not understand her desire. If I had her mathematical skills, I'm pretty sure I'd be content. Just saying. I was also having trouble imagining the virtual experience Sulan undergoes. While I've read and seen other stories with that element, I just had trouble focusing on it this time.

I kept going though, telling myself, "Just one more chapter." Well one turned into two turned into finishing the book in one night. I would describe the length of the chapters as short-medium length which is pretty much perfect for me and everyone ended with a tease that made me have to continue. While the beginning is a little slow with (necessary) setup, the middle and end are fast-paced and jam-packed. Although the story is partly resolved, there are still many threads that will be addressed in the sequels I hope are coming.

Sulan, although opposite to me temperamentally, is very sympathetic and has good reasons for wanting to be able to defend herself giving the chaotic world in which she lives, where students are daily at risk of being killed by guerrilla warriors.  I also really loved her pet/guard Riska who is drawn as a bat/cat hybrid in the back. Fierce, protective, and fuzzy-does it get any better? Her friend Hank was also a particular favorite of mine-very smart girl (actually pretty much every character is super smart, no face-palming here!) with believable motivations and actions.

Overall: A really fun introduction with solid world-building and loads of action-worth checking out!

Check out the home page for the tour for more links to the stops on this tour!