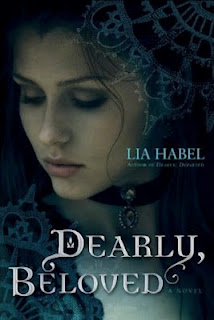 Well, I have a lot of feelings about this book so I'll try not to ramble. My immediate thought is that your opinion of this book will probably hinge on your feelings about Nora and Bram, who I liked and tolerated respectively in the first book Dearly, Departed. Although there are also four other POVs (for a total of six, an increase of one from last time), the bulk of the story rests on them. And quite frankly I did not like them very much this time around.

I actually preferred the other narrators: Nora's best friend (and my favorite character in Dearly, Departed) Pamela, suffering from PTSD and consequently not as kick-ass as before; Laura, a new character who uses her decaying zombie body to grow plants and whose naivety helped set her narrative apart; Vespertine, a rival of Nora, whose past is sort of revealed and yet there were some confusing moments where she seemed to be at war against herself; and Michael Allister, would-be suitor to Nora, fervently anti-zombie, and kind of deranged. And yet I much preferred him to Bram, because in all honesty, I am icked out by the idea of a human/zombie romance. That this reanimated body is moving around while also still decaying in on itself and moving closer to the permanent death it should already be in-it's hard for me to wrap my mind around. I also found Bram and Nora a bit sickening together as established couples sometimes are with Nora abandoning Pam in her moment of need and basically having indistinguishable narratives. The main way I could tell their chapters apart was who "I" was gushing over and if Bram thought about being a zombie.

Another minus was the interminable length-it seemed like it took FOREVER for something to happen. A plus though is that I expected certain plots to go one way but then they went a different way, so at least there were some surprises in store for me. I just wished this novel had been a bit more condensed. I don't think everything needed to be included.

Overall: A letdown after the enchanting freshness of Dearly, Departed; I'm left hesitant to pick up the third part next year.

Cover: I really preferred the pink of the first book. This has the same model, I believe, but I don't like the colors as they don't stand out the same way to me.