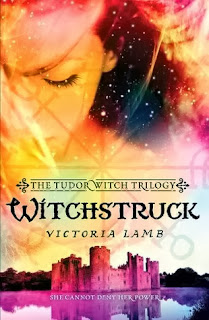 I'm a bit surprised not to have seen more reviews of this. Though historical fiction, it does feature witchcraft and HarlequinTeen is an imprint I trust to put out the kinds of books I tend to like. Though this one was not an all-around winner, I am still curious enough to want to try the sequel, due March 2014.

Going back to 1554, Lady Elizabeth is under house arrest under suspicions of treasonous dealings against her sister Queen Mary who is preparing to marry the Spanish Catholic Prince Philip, perhaps birthing an heir and forever stifling England in Catholicism. Accompanying Elizabeth is a small cohort including Meg, a witch who must navigate her own tricky path in deeply superstitious patriarchal England.

This book initally caught my attention due to its historical setting (I adore Elizabeth but haven't read much about her life under her sister's reign) combined with the paranormal element of witchcraft, being that fear of witches and their persecution was rampant, women without a male's protection being especially vulnerable to such a charge.

What's striking to me in hindsight is comparing Elizabeth and Meg's journeys over the course of the book. Though neither gets to travel much given that Elizabeth is under house arrest for almost the entire book, they share many parallels. Both are young women whose mothers died young with rather uncaring fathers, currently under the control of someone else's indifference. Both would be given in marriage by others for political gain (Elizabeth to a royal prince, Meg to the powerful local witchfinder). And both attempting to wrangle power as Elizabeth wants to cement her position as heir to the throne and Meg wants to consolidate her witchly powers. Both would also like to just plain survive, which is threatened at several points.

The problem comes about as I was absolutely fascinated with Elizabeth but less enthralled with Meg, who is our main character. I thought Meg was kind of dumb and unduly possessed with growing her powers especially as she's under almost constant surveillance. I would prize survival higher and it's only when she's almost caught on several occasions that she ever really considers this. I was frustrated with her at several parts for the dumb choices she made though I do admire her determination to correct the wrongs.

Probably my least favorite part was a budding romance with a Spanish priest Alejandro who is planning to join an order that does allow for marriage albeit with some vows of chastity for most of the year (this is told to us several times). I was not charmed by him though he's certainly the best male character depicted as almost every other male is absolutely vile. I was not feeling the sparks!

Overall: This book just lacked some magic for me-I found the writing easy enough to follow but I wasn't thrilled with anything. I plan to check out book two and hope for more amazement there.

Cover: I love the colors and seeing Woodstock but I'm not really a fan of what we can see of the girl's face-it's just awkward.

Other Opinions:
Buried in Books
Inspiring Insomnia
The Reader Bee