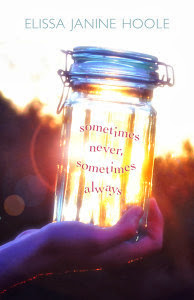 Sometimes you just need to read a contemporary focusing especially on high school drama, which is honestly one of my favorite subjects. However in yet another fail of reading comprehension, I missed what this book was going to be about. I thought the main character Cass was assigned to write a poem for English and ,stifling under a restrictive religion, she wrote about her cult-like church, causing a scandal. She does manage to cause controversery but it is through a blog where she gives advice from her amateur tarot card readings. I was a bit more interested in the premise I thought I was getting but I did like all the issues this book touched upon.

First and foremost would be bullying. We see a lot of accusations of "bullying" in the blogosphere, many of them cheapening the meaning of the word. Disagreeing with someone and explaining your reasons why is not bullying. Writing hateful comments about someone in addition to making mocking comments in person is definitely bullying as is demonstrated in this book. As the blog explodes in popularity, so does the commenting become more frequent and more hostile leading to real world consequences. The book does a great job handling the (unintended) fallout from this experiment.

I also mentioned religion. I have a confessed weakness for books about cults and for some reason started thinking I would be getting that in this book. Though the family's religions is pretty intense (Sunday services plus Wednesday AND Friday meetings) and very conservative beliefs, I didn't feel like it merited cult status to my dismay. But the book does not promise any such thing so I don't know why I thought it might pan out like that. As someone who is religious and interested in religion, I would have liked more exploration of the religious beliefs of everyone in the church and more insight into why Cass was rebelling against that.

However while everything touched on in the book is important, there just felt like it was all a bit too much and nothing got enough page time to really speak to me. Some of the topics we cover are: Cass is maybe losing her best friend, is trying to find her own personality, has a crush on a boy, is rejecting her parents' religion, is worried about her gay brother, is dealing with bullying issues, etc. It's a lot and I didn't even talk about everything here! Of particular interest to me was the mention of Cass's now deceased younger brother; it sounds like his death from SIDS played a big role in the family's religious development and I really would have loved to know more about that.

Additionally Cass isn't sure who she is as a person. I sympathized with her plight-I certainly didn't know myself as a teenager but her uncertainty left me feeling uncertain. I think at this juncture in my reading, I wanted a more confident character. I know that's an unfair demand to make of this book but I wanted to share some insight into where my mind is to help explain why I didn't fall head over heels in love with this book.

Overall: A stuffed to the brim contemporary with issues that I think many people would be able to relate to; definitely one for fans of more serious contemporary though there are lighter touches.