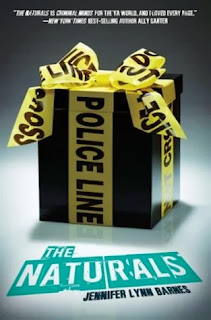 I saw quite a few mixed reviews before I picked this up, which made me nervous as this is only my second experience with Barnes' writing. Well, no worries! This was well within the kind of snappy writing I expect from Disney-Hyperion and I read it all pretty quickly until the ending where my pleasure with the novel went rapidly downhill. But let's start at the beginning.

Cassie has always been able to read people, by nature and also nurtured by her psychic mother. During her teenage years, the FBI comes a knocking seeking to add Cassie to their team of Naturals, young people with some kind of extraordinary talent (such as profiling as Cassie can do) to tackle cold cases. Cassie agrees with the thought in the back of her head of being able to solve her mother's murder, long since cold. At the group home, she meets four other special teenagers and they must battle their feelings and hormones to catch a serial killer before he strikes at Cassie.

Like I said, I really liked the writing style. There are lots of quips and sarcasm throughout and the book moves quickly. We get some insight in to how Cassie can spot and assess as much as she does but it's also somewhat cryptic because it just comes so naturally to her. She and the other teenagers in the program astound the adults, who are also very good at these skills but only because of years of intensive training and experience.

Apparently some readers don't like the trope about a group of extraordinary people gathered together. Personally I do though and this group mostly worked for me because I like reading about really smart, knowledgeable people getting to exercise their talents. No surprise to those who've read this that my fave was Sloane, who can rattle off statistics like no one else. Cassie is a close second with master liar/lie spotter Lia rounding out the top three. But who else is in the house? Why, it's two boys: Michael, who helped recruit Cassie and can parse emotions; and Dean who is a profiler like Cassie with his own dark past. Initially it seemed like Cassie might really like one but it soon becomes a love triangle as is acknowledged by the end with Cassie being urged by the one guy to think about her feelings for the both of them. Ugh, did I find this unnecessary! I think the book could have focused more on the complex feelings and tensions within the group home without needing to add this bundle of hormones.

The other thing is the resolution. We have a serial killer who seems to be going after women like Cassie and eventually to want to take out Cassie. On the one hand, there is a great twist with this that I won't share for fear of spoilers. But on the other hand, it was not as satisfying as I expected. I think this might be partly because it will end up being part of a series and there are still some loose ends to tie up. If you've read this and would like to discuss, let's!

Overall: A surprisingly fun (because who expects to have fun when tracking a serial killer?) compelling thriller with snappy dialogue and strong pacing. I sincerely hope the love triangle will be quickly resolved in the next book or it may dominate my feelings about the series as a whole in a negative way.