All The Truth That's In Me 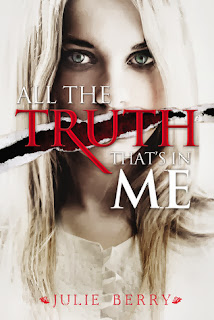 All The Truth That's In Me by Julie Berry
4/5 stars
Viking Juvenile, 2013
274 pages
YA Thriller Historical

I have a lot of feelings about this book and I can only hope I can explain them with some eloquence for you. I can't go too in-depth into the plot as that is part of the thrill of reading, not knowing what is to come. In fact, Kendra Levin, Senior Editor of Viking Children's Books promises "you won't be able to put this book down until you've reached its heart-pounding conclusion" and I can't disagree with her. The closer I got to the end, the harder it was to put down as I had to have everything confirmed for me. I am still processing a lot of it though so walk with me through some spoiler-free thoughts. I'm going to share the publisher's summary from Goodreads to give you some context.


"Four years ago, Judith and her best friend disappeared from their small town of Roswell Station. Two years ago, only Judith returned, permanently mutilated, reviled and ignored by those who were once her friends and family. Unable to speak, Judith lives like a ghost in her own home, silently pouring out her thoughts to the boy who’s owned her heart as long as she can remember—even if he doesn’t know it—her childhood friend, Lucas. But when Roswell Station is attacked, long-buried secrets come to light, and Judith is forced to choose: continue to live in silence, or recover her voice, even if it means changing her world, and the lives around her, forever. This startlingly original novel will shock and disturb you; it will fill you with Judith’s passion and longing; and its mysteries will keep you feverishly turning the pages until the very last."


Setting:
I'm a bit confused about the setting as it seems very historical without any modern technology but I have no idea in what year it might take place. I am also assuming it is America but have no real basis for that other than that it's an American publication. Does anyone know anything more about this? Googling "Roswell Station" introduces Georgia though I got more of a New England/Canada vibe (probably because of the cold as well as the villagers making me think of the Salem Witch Trials.)

Genre:
I know that genre categorization can be tricky but I find it helpful for my own piece of mind. I'm not really sure how to classify this book. Yes, it's in the YA section but that's category, not genre. Yes, it's historical but what period? Yes, it has some suspenseful and mysterious elements but my overwhelming impression is not one of thrilling. Yes, there's romance but there's no way you'd call it that. So it's a difficult to categorize this book to my dismay. However I also think that speaks to the book's originality.

Second-person:
The narration is primarily in second-person from main character Judith who has had her tongue cut out, rendering her silenced to the man she loves. I have had mixed experiences with this technique as I usually end up thinking the "you" is me and it's not. I struggled with that on occasion here but for the most part, I was able to remember who you is and to stay in the story. It was incredibly easy to sympathize with Judith in her mute ostracized state and I loved her quiet courage as people sought to carry out their machinations assuming her silence for complicity.

Twist/reveal:
I kind of feel like the ending is supposed to contain some surprises. The aforementioned editor calls it a "pinhole" narrative, where the world is slowly revealed to provide answers. Though I spent much of the first part confused, I soon mostly got my bearings and did not find the ending particularly startling. Based on the information revealed and our knowledge of Judith's character as well as the suspicious nature of the villagers, I pretty much had my thoughts confirmed rather than upended. I don't know if my expectations were off-track because of the pinhole and I built that up or if the ending wasn't as shocking as it could have been.

Overall: Still processing complicated feelings about this book but I think it's definitely worth checking out if you can :)