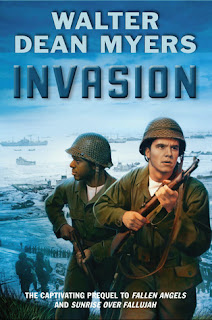 I've seen a lot of works by this author but have never tried any of his works for myself. I was a bit nervous to read that Invasion is a prequel to two previous works by Myers but after conducting a bit of research, I realized they aren't really related. One character in this book is the ancestor of characters in the other two but they are set in much later time periods while this one looks closely at D-Day and the invasion of Normandy.

I've read some outstanding examples of WWII fiction (um, Elizabeth Wein anyone?) but lately it has been looking more at a female perspective rather than the male soldier perspective so I was excited for a different take. From the summary, I thought it might explore segregation during this period in addition to looking at war's tragedies. That's not really true. Though main character Josiah Wedgewood does briefly mention segregation (not officially ended until an Executive Order in 1948) and how that might make his friend feel, never mind how he feels about it, it does not play an important role. Instead there are long descriptions of the fighting and killing and towards the end, the story becomes more poignant with Josiah pondering how he'll continue.

After getting over my disappointment that this book isn't really about Josiah and Marcus Perry's interracial friendship (and really doesn't the cover kind of suggest that?), I really struggled with this book. It reminded me of "Saving Private Ryan" with its incredible visuals that are much harder to read. I found the reading very dull. However it did improve for me toward the end particularly with Josiah's comrade Mink quoting poetry, juxtaposing those beautiful lines against the barbarous circumstances and his musings on war. In the author's note, Myers shares his own experiences with his son serving and also discusses the books this one precedes chronologically. While I liked these moments, they weren't enough to make up for my lack of connection to the story and especially to Josiah. I think it is very well-written and will certainly be a powerful read for some, just not me.

Overall: May be a good read for those who are already fans of this author and who really love World War II fiction; I just didn't connect with the characters or storytelling.