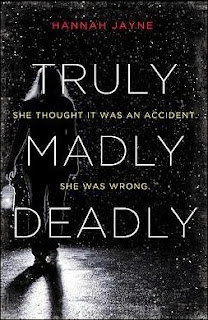 This was another book I bought without really looking at reviews, only to see them be middling. Still I loved the idea behind it so much that I was glad to have some space in my busy review schedule to actually read a book I own.

The part of the summary that I loved was Sawyer thinking her boyfriend died in an accident only to discover that someone carefully plotted his death and assumes she would be grateful for those actions. That assumption comes from knowledge that the boyfriend was abusive to Sawyer, something that she never shared with anyone. Then a teacher who harassed Sawyer ends up dead and things really start getting crazy.

I found this book very easy to read though its writing certainly isn't deep nor do the characters have much development. The most intriguing part was how Sawyer has been prescribed medication (understandable given the death of her boyfriend and also lingering tensions from her parents' divorce) and her narration of events may or may not be accurate depending on how she's coping. Personally I was completely caught off-guard by the reveal of who is behind everything though there wasn't really a large suspect pool-I feel like it could have been one of four people, based on who is named and who is close enough to Sawyer and it was one of those four. But that's only in hindsight. While reading I was completely caught up in the story.

So the writing keeps you gripped. But the characters, where the novel really makes or breaks it, weren't much of anything. I adored the flashbacks of Sawyer to memories of her boyfriend: how he always said he wanted her which felt so good after the turmoil of her parents' relationship but how that turned dark. I apparently have a high tolerance for books with abusive relationships so I valued seeing those sections and how it influences Sawyer's decision in this later chapter of her life. She feared no one would believe her about the abuse because they seemed like the perfect couple and she fears no one will believe her about these other incidents especially because when she does try to go to the police, the small fragments of evidences she has are dismissed as coincidence. Other characters include her best friend Chloe who adds some welcome moments of humor and new love interest Cooper who I didn't get much of a feel for (I pretty much pictured him as a younger Cooper from Meg Cabot's Heather Wells series because they share a name.)

Overall: Addictive writing but not an outstanding example of characterization. Pick it up for a quick read, maybe even this month as there are a few chills within these pages.

Other Opinions:
Alison Can Read
I Swim for Oceans
Jen Ryland/YA Romantics
Rather Be Reading
Supernatural Snark
The Book Babe's Reads