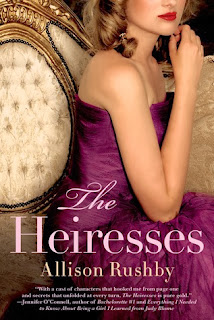 This book attracted me for several (rather shallow) reasons. For starters, the cover is super pretty. I love the color of her dress and her lipstick and it just screams historical elegance to me. Once I read the summary, I was pulled in by the mention of sisters (triplets to be specific) and 1920s London, a time of elegance for those wealthy enough to be a part, which these girls most certainly are. So I bought a copy and then it sat and sat and sat while I worked through review books before finally settling down with it this past weekend.

Well I could just kick myself for waiting so long to pick up this book. Though it had some flaws that nagged at me, I was mostly just swept away and I really enjoyed it. Best of all, I believe it is supposed to be a standalone so each story is pretty much wrapped up. I think this is partly because it seems to have been originally published as six e-books with a cliffhanger to end each section but designed just to be those six parts and nothing more. I appreciate a conclusive ending with the most important plot points addressed but with room for the reader to speculate about the ultimate end for the characters as they age and continue moving through their lives.

However I was nervous at the start because it begins with the birth of the triplets to a dying mother and a cruel father with an indifferent doctor in attendance. Only aunt Hestia's determination and the ministrations of a kind nursemaid aid the girls in their first days. Soon each is farmed out to a different family with their origins concealed until they reach the age of eighteen and their father is dead. Aunt Hestia brings the three girls together to share the news and lets them at London. Eldest Thalia is thrilled to escape her horrible upbringing and eagerly partakes in everything offered: parties, boys, alcohol, drugs, etc. anything to battle her demons. Middle Erato is of a more intellectual bent and is excited for the opportunity to attend university but is derailed by a young man. Youngest Clio had the idyllic pastoral childhood and is concerned with her mother's lungs as she observes her sisters' embrace of decadence. Additionally the girls have to battle their half-brother for their mother's fortune and investigate the mystery of why Clio looks so different.

There is so much packed into this novel so there is really something for everyone. Family drama, romance, childhood traumas galore, class issues, eugenics makes an appearance, religion, contemporary birth control: what have you is probably there (and I'm not even mentioning everything!) Personally I found myself most drawn to Clio, being rather appalled by Thalia's casual disregard for her person and never quite clicking with Erato though I had anticipated being most connected with her. Instead Clio's faith and confidence in herself was what I loved. That's not to say that I didn't like the other characters, just that Clio had that something special that intrigued me.

I also must mention the names. The older generation are sisters Demeter and Hestia with next generation being Thalia, Erato, and Clio. As a lover of Greek mythology, I recognized the source but I do wonder about its likelihood. It just seemed so out-there and I would have expected names more like Margaret, Mary, and Elizabeth. I never got used to seeing them in print even with acquaintances like Venetia appearing next to them.

Overall: An enchanting breakneck romp through 1920s London stuffed to the brim with drama that kept me breathlessly flipping through the pages especially as I reached the conclusion.

Other Opinions:
Books Live Forever
The Best Books Ever