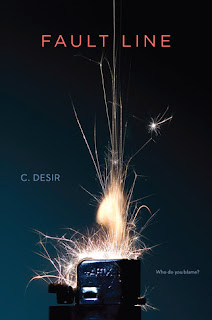 I think I picked this one up after noting that it was a contemporary but without really reading the summary as this is definitely on the darker, heavier side of contemporary. In comparison, my tastes tend to lean toward the lighter comedic side though I venture over from time to time. It raises questions around rape, responsibility, and healing, showing that there are no easy answers in such a situation.

The book opens with a provocative scene, only to flash back to the first days of Ben and Ani's relationship and trace up to a party where Ben stays home and something happens with Ani that sends their relationship off the rails. Ani is no longer the girl Ben knew and loved though he struggles to hold on and to help heal her.

I thought it was an interesting choice to narrate from the perspective of the boy whose girlfriend was raped. Mostly I see novels from the girl herself (see Speak by Laurie Halse Anderson or that Sarah Dessen book whose name is escaping me.) I wish we could have seen more of their relationship in good times but, as you can see, the book is pretty short so everything moves at a good clip. I really struggled with Ben's insistence on trying to "fix" Ani because, from my perspective, it is not. He kept claiming it as his responsibility, letting his scholarship, friendships, and family fall by the wayside. Because it's really not-he does not possess the ability to heal her, only she can do that at her own speed, following her own healing process that may lead to a lot of hurt before anything redemptive can come out of this.

As I mentioned some of the big questions revolve around culpability:
The book really blurs the issue-for some reviewers, it seem as if if she'd been roofied or more obviously impaired, then it would obviously be rape. But it's so difficult to try to determine what actually happened that fateful night at the party, mirroring our actual world. We just don't know.

Overall: An intense read that will definitely not be for everyone but I appreciated its unique perspective and the realistic depiction of a volunteer advocate to provide information in the aftermath.

Other Opinions: I strongly encourage you to check out some other reviews as people have written from a lot of different perspectives; here are a few but more are on goodreads and other blogs.
A Good Addiction
Good Books and Good Wine
In Bed With Books
Stacked