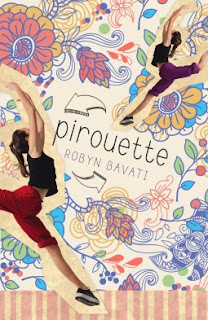 I adored Bavati's debut Dancing in the Dark so I was thrilled to see another work from her, especially because it also focused on ballet. Performing arts books are one of my weaknesses so it was a no-brainer that I'd want to check this one out too. Unlike Dancing in the Dark, this is a much lighter tale. It had some good moments but ultimately failed to make much of an impression on me.

The plot is pretty easy to describe (think The Parent Trap): twin girls are orphaned at nearly at birth and adopted by two separate families, both located in Melbourne, Australia. Both take dance, in homage to their birth mother. While one's life utterly revolves around ballet to her dismay, the other craves more in her life. They meet when both are enrolled at a summer dance school and hatch a crazy plot to switch places long-term. Therefore Simone can have a break from dance and experience a more academically rigorous schedule while Hannah will get to dance full-time. But can they keep this up?

I adore switching places plots a la The Parent Trap and even Freaky Friday despite their improbability. Something in there just speaks to me and my wish fulfillment. I totally wanted an identical twin when I was a child and I would have loved trying to pull the wool over everyone's eyes. Still I do wonder about the plausibility of it all: could you really sustain such a long-term masquerade with no one getting suspicious? These girls have families, friends, teachers, etc. who know them to some degree and no one really caught on?

Also as a big fan of dance books, I didn't feel like I got enough dancing in this book. The story seemed more concerned with the girls (as is its right) than with describing the difficult life of a dancer with the foot pains as they're crammed into toe shoes and the exquisite pleasure of mastering a difficult step. Instead there are romances for each of the girls and the struggles of maintaining a secret life before the ultimate unveiling, which was cool though I'm not sure about the steps they took to bring it about. I mean, they got some help from people I don't think should have helped. Anyway all's well that ends well.

I don't have much to say about the girls. Simone is more quiet and reserved to Hannah's boisterous outgoingness. This much is noticed but the girls do enough to fake it and get by. Their parents are interesting enough with limited sketches of the other people around them. I never felt much of a connection to anyone and was actively rooting for the girls to reveal the truth instead of being on pins and needles to see how they'd keep going (which I think might have happened if I had felt more connected.)

Overall: This was a cute enough story-perfect for a palate cleanser after something tough and it goes by very fast if you just want a light easy read.