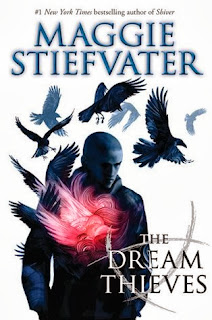 After first book The Raven Boys absolutely enchanted me last year (becoming my favorite Stiefvater novel), of course I wanted to read its sequel. The only problem was not quite being able to remember everything that happened. I remember finishing it on my couch before a Manchester United game started and then clutching it to me because it was a hard copy but specific plot details? Not important enough for my stupid brain to remember!

Still I pretty easily slid back into the world. I certainly remembered Blue and the prophesy about her true love dying after receiving a kiss from her as well as her family of psychics. I definitely remembered the Raven Boys, Gansey, Adam, Ronan, and Noah though I had forgotten something important about Noah even as the text eventually reminded me of that. I knew about their quest for Glendower and the steps they had taken up to that point while I wondered what was to come next.

This sequel definitely gave me some similar feelings to the first book as I became immersed in the world and tried to follow everything that is happening. But in the first book, it all seemed to come together in a beautiful magical way whereas this felt dull. I'm not the biggest fan of Ronan and he is the main focus so that didn't help. I felt like The Raven Boys, though definitely focused on Gansey, also gave a lot of time and attention to the other characters. This book didn't. It was mostly Ronan and his dream thieving as hinted by the cover and title with Noah barely showing up, Adam continuing to have the most ginormous chip on his shoulder about his poverty, Gansey's obsession with Glendower being put on a backburner, and Blue bristling at not being included like one of the boys: those are their basic stories and it was not near as expansive and enchanting as in The Raven Boys. Meanwhile like I said, Ronan's story was added to; I will only be able to tolerate this if Adam gets similar treatment in book three or four because Ronan is my least favorite and I find him irksome.

Overall: I liked it but I was disappointed. I had hoped this second book would increase my love of the series but instead I felt a little bit like I was marking time and missing more than a few plot points despite my close reading. I still intend to try the third book when it comes but I'm less excited about it.

Other Opinions: My blogging friends wrote loads of amazing thoughtful reviews of this book; here is a *small* sample. Stiefvater writes so beautifully and it obviously inspired them:
Books Live Forever
Jen Ryland/YA Romantics
Love is not a triangle
The Flyleaf Review
The Midnight Garden
The Sirenic Codex
Unforgettable Books
VeganYANerds