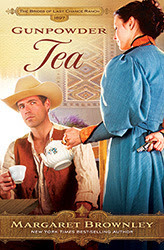 *Spoilers will be discussed.*

I've been a fan of Brownley's writing for a while now, including the first book in the Brides of Last Chance Ranch series, Dawn Comes Early.  The premise is that a female ranchowner is looking for an heiress; among her list of stipulations is that the woman will remain single forever. Though I missed the second book, I was easily able to dive back into this world for the exciting third book.

Our heroine here is Miranda Hunt posing as Annie Beckman in her service as a Pinkerton detective. This is her big chance to prove her capabilities and she is determined to be successful in ferreting out the Phantom, the ringleader of a train robbing gang. Opposing her efforts is "Branch" or rather Jeremy Taggert, a stablehand arrested for robbing a train but somehow let out to plague Miranda's footsteps as she attempts to fend off sparks and solve the case.

As I wrote this, I realized how hard it can be to write about a book when the main characters have multiple names. For the most part I thought of them as Annie and Branch so that is how I will continue to refer to them in my review. Additionally the publisher summary kind of gives away a big spoiler. Of course Branch is not a career criminal; he is a Wells Fargo detective and is there for the same reason as Annie. This isn't revealed until 100+ pages into the book though there are many clues beforehand, so many so that even I realized that he was on the side of the law (no I didn't read the summary-I saw Brownley's name and wanted to read it solely because of that.)

I really liked both characters. Annie is forever striving to prove herself, stung by her father's dismissal of her career path and attempting to live up to his life, which was tragically cut short. Jeremy also has pain in his past like a mysterious incident that sat him at a desk for two years. The two really clash with each other at first, before fighting and then succumbing to their feelings. They end the book in a really happy place.

Two things I really loved about this book were the small instances when Annie catches the wrongdoer (such as in the opening chapter) and the chance to check in with characters from previous books. Of course both of the couples from the other two books are represented as well as the flamboyant Bessie Adams whose quibbling with her sister amused me so in the first book and Ellie Walker who is probably never going to get her heiress to abide by her conditions.

Since this is marketed as a religious novel, I want to touch on that aspect, which I thought was very well-handled. Both leads seem to have a relationship with God and use that as a defining moral compass. Concerns about right and wrong ripple throughout the novel as Annie and Branch worry about the lies they're telling to suss out the thief as well as what they're keeping from each other.

Overall: A sweet fast easy to read romance that just hits all the right beats. If you like reading Christian historical romance (and especially if you have enjoyed previous Brownley writings), you will probably like this one too.