ARC Review: Dancing in the Dark 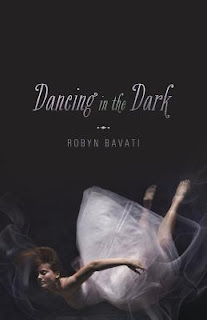 I just adore dance books so I was very excited to get this one with the additional bonus of religious conflict and the presence of sisters! This book ended up being a standout read for me so far this year. An additional bonus is that this book is set in Australia and takes place over years, allowing for more time with our main character as she grows in the art of dance.

That main character is Ditty and she is a Haredi Jew-basically the most orthodox and conservative type. Although this book is set roughly in the present (as indicated by technology such as cell phones), for the most part, her religious community eschews such gadgetry. She attends a religious school and people mostly live and die in that community. But Ditty manages to discover ballet and after being forbidden by her parents, sets off to dance, managing to keep it secret for over five years before confrontation breaks out and Ditty has to choose between her love of dance and her love of family.

As mentioned, Ditty's family is very conservatively Jewish and follow customs that may be unfamiliar to some readers. I am very interested in religion and was pleased to recognize most of what was mentioned, also with the assistance of a glossary in the back. Most shocking to me was Ditty's rebellion, starting relatively small by taking dance lessons behind her parents' back and escalating to eating non-kosher food and working on the Sabbath (the most shocking parts of the book to me).

I loved the dance scenes and how Ditty's world opens up when she enters it, meeting new people, having new experiences, and dreaming beyond the narrow walls set up by her parents. She brings her best friend and cousin into her ever expanding web of lies but keeps it going for over five years with her parents none the wiser. This time passed very quickly but it was nice to see Ditty grow up like that.

Still I did have some problems with the book, most probably stemming from my perspective as a Christian. In general, I thought that the people who did believe were somewhat discounted as brainless sheep. The fact that they were not our main focus probably had something to do with that but I think they had their own questions, doubts, and struggles and were not actually unquestioning drones as Ditty sometimes seemed to think. I also found the ending quite heartbreaking

Discussion Question (would really love your thoughts as I'm confused about how I feel):
At one point in the book, a guy asks out Ditty and she refuses because he's not Jewish. His response is that that is racist. My question is in two parts:
1. Is Jewishness considered a race? Wouldn't "bigoted" be a more appropriate word if you were going to make that argument?
2. Is it in fact bigoted? My immediate response was no but being Jewish is considered as immutable as skin color in this world. Either your mother was Jewish, making you Jewish or not; there's no in-between, making a comparison between the two "traits". But it's also very personal who you choose to date and I think religious factors are super important given that it shapes your worldview and values so I can't fault her for being bigoted. I hope that's clear but I'll be stopping by this evening to sort out any clarifications and to participate in discussion with you.