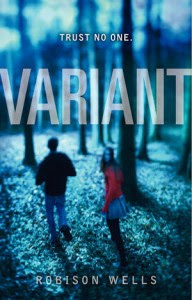 I'm not entirely sure how to classify this book as it might be science-fiction although at the beginning it seemed like a dark contemporary.  Benson Fisher is a foster kid leaving Pittsburgh, PA for New Mexico and an exclusive boarding school. Once there he discovers many weird things. First there are no adults but there are four big rules.  If one of those is broken, then the punishment is "detention," death. Second the place is divided into three gangs, each with a different philosophy about how to survive in the school: act like everything's just peachy keen, act out of anger, or just keep your head down and try to survive. Benson chooses the last gang but with immediate plans to somehow escape And third that somebody seems to be watching them but for what purpose?

For the most part, this book was a lot of "hurry up and wait." Nothing much was happening and we were not getting enough information for my liking.  A lot of the same information was repeated to me. And while Benson is desperate to leave the school, no one else seemed as motivated, which was weird. How long does it take for the spirit to dissipate from a person? I really had trouble understanding that.  There are also several paintball games which are one of the constants of the book; these games made me think of Ender's Game except not as interesting. But then...

There's a twist probably about halfway through the book that I can't tell you about because OMG SPOILERS! Regardless, that upped the tension as Benson realizes he can trust no one and the stakes get higher in his need to escape.  But my confusion also increased as the action moves. In fact the final scenes were somewhat confusing as there is an explosion of movement and excitement. I have some theories but nothing definite about the pretty big cliff-hanger at the end.

Overall: Definitely picks up toward the end but you might not have the patience to make it there.