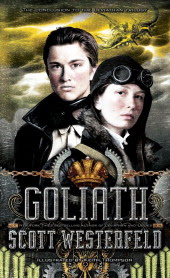 Although I loved the previous books Leviathan and Behemoth, I was disappointed in this book as will be discussed later in the spoiler section because it's potentially a big spoiler. The things I did like were continued incorporation of real-life events but with a twist. The inventor Nikolai Tesla plays a big role in this book as do movie pictures, the Mexican Revolution, and American neutrality during this alternate history steampunk version of WWI. The stakes are getting higher for our intrepid heroes Alek and Dylan (really Deryn) Sharp.

They are still on the Leviathan but are attempting to prepare for their imminent farewells as Deryn continues in service to the British Army while Alek pursues the Austrian-Hungary throne and attempts to end the war.  There are many exciting adventures in and around the Leviathan as they travel from Istanbul to New York City with stops in Russia, Japan, California, and Mexico.  There are only a few new characters but some of those introduced in Behemoth resurface. Additionally many secrets are uncovered and Alek and Deryn's friendship is strained by some of those secrets.

Again for me the lovely illustrations were a highlight, helping me visualize the distinctive world created by Westerfeld.  As someone not interested in the action scenes, I did feel like there were a few too many featuring Deryn doing something daring aboard the Leviathan. But I just skimmed those and got on with the story. Unfortunately it was harder to skip the part I didn't like as it increasingly took up page space-see the spoiler below.

SPOILER:
I was so sad that Alek and Deryn fell for each other! I was really excited about a book where a guy and a girl were just really good friends without the romantic interest.  Additionally I guess I'm kind of a snob because I wanted Alek to marry a princess. Not that she'd necessarily understand him like Deryn does but I was so happy about a YA novel with opposite-sex best friends who weren't romantically involved that it crushed my spirits a bit to see that not-at-all-desired ending occur.
END SPOILER

Overall: Although I was not very pleased with the ending, I mostly enjoyed the ride and heartily recommend at least the first book to readers of YA, even if they don't read much historical.