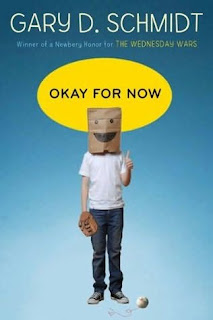 I originally saw this on Netgalley but skipped over it because I wasn't sure I'd like it. Then I saw several favorable reviews and rethought my previous assessment. I'm so glad I did because I LOVED this book!

It's about an average boy named Doug who moves to a new town in upstate New York in the beginning of the book with his abusive father, his long-suffering mother, mean older brother, and with another older brother serving in Vietnam and follows him as he adjusts to the new town, falls in love, and learns a great deal over the school year 1968-69.

Thus this is a historical novel with appropriate references to Doug's beloved Yankees, the impending landing on the moon, and increasing distaste with the war in Vietnam. However it still feels very contemporary as Doug deals with family, friends, and school just like kids today do. He has similar hopes and fears and I absolutely loved him. He grows up in so many ways and develops into a better person. You also get to see many of the people in his life grow too including his brothers and father, a real nasty piece of work for much of the book.

Besides the story, there was also a lot to learn in this book particularly about drawing, birds and baseball, three things that greatly interest Doug and help him rise above the bitter angry young man he could be.  That was another thing I loved, whenever Doug realized that his go-to response didn't help the situation but that instead he could respond another way.

I'm sorry this isn't the most coherent review; I just really loved this book and I HIGHLY recommend it! So what are you waiting for? Go find a copy and devour it!