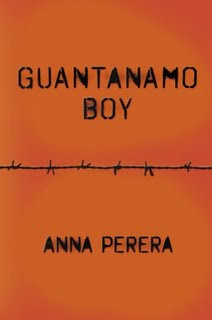 Although I read a lot of contemporary YA, I haven't seen much dealing with one of the most pivotal events of my generation. Now I'm older, I've spent nearly half my life with my country waging the War on Terror, and though I'm interested, I've still seen very few books touching on it. I was doubly intrigued when I realized that Perera was British, lending a different perspective to her story.

This book is set about 6 months after 9/11 in England following 15 year old Khalid, an Englishman of Pakistani descent living an ordinary life in a small British town. He goes to school, has a crush on a girl, and lives for soccer.  For the Easter holiday, his family travels to Pakistan to help his family. Although he was been warned about the increasing risks of looking Muslim, he has no fear being confident in his British citizenship. Yet soon into his visit, he is kidnapped, held without benefit of trial, and eventually sent to Guantanamo Bay. All told, he is held captive for over two years while his family frantically searches for him and many abuses against human rights are perpetrated against him and the other prisoners.

This is a hard book to rate because while I think it is important and well written, it's not the kind of book I can love. A book I love leaves me feeling warm and fuzzy, has generally made me laugh, and frequently has some swoony romantic scenes. This book is basically the opposite of that but still recommended to all of you out there with the caveat about some intense scenes with violence.