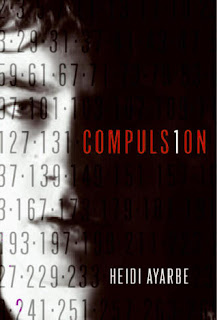 After reading Ayarbe's powerful Compromised earlier this year, I looked up what else she had written and saw that this book was upcoming. I put it in my to-read list and then requested it from the library. I've only seen two other reviews of this and was excited to read about a boy MC, still rather rare in YA, and OCD, something I've never seen tackled in a book (except for the Monk books).

In this case Jake Martin's compulsion is numbers, ideally prime or else he has to keep counting and calculating until they are prime.  He has a specific routine that has to take just the right length of time or else his whole day would be thrown off. At the start of the book, he is preparing for his third soccer state championship victory, which would be the perfect day with prime number converging and preparing for his future. After that, he'll be normal; he'll be able to help out his family, he'll make more than one friend, he'll be able to hang out with girls, and the cobwebs won't cloud his vision.

It took me a while to get in to this book as I tried to understand Jake's compulsion. Sometimes he added numbers, sometimes he multiplied and that didn't make sense until I realized that this was Jake's compulsion and it didn't matter what I thought. As the book progressed, I had a growing sense of panic and nervousness because I knew that Jake's compulsion would not disappear like he thought and I was attempting to brace myself for something awful. And make no mistake, some awful things do happen but I'm not going to spoil that.

My favorite part of the book was how I was drawn into Jake's compulsion and recognizing that he needed help but being powerless to do anything. This also made me feel uncomfortable and helpless but also happy at how attached I felt to Jake. He was like the brother I've never had and I just wanted to reach through the book and share some of my quirks and get him to some professional help. Because he is a good guy, trapped in a bad situation and I loved him.

Overall: Another powerful read from Ayarbe; just took a while to really get going.