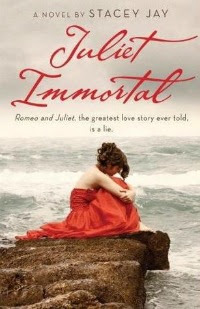 Source: Received a free ARC through Amazon's Vine program in exchange for an honest review.

Did you have to read Romeo and Juliet in high school or college? Well I did and this book is here to say that it was false. While there was a great love story, Romeo betrayed Juliet and stabbed her in his zeal for immortality, leaving her to die forsaken on the cold stone floor. However just as Romeo lives sustained by magical forces, so does Juliet, battling him throughout the centuries. He needs to convince one soulmate to kill the other and give strength to his cause while Juliet must convince them to fully trust each other and thereby thwart Romeo.  But this time, it's different...

Normally both Romeo and Juliet possess considerable powers when they take over a new body to complete a task but this time they are weaker than usual. Additionally their watchers don't seem to be in town, leaving them alone to do battle.  Juliet takes over the body of Ariel, a girl literally and figuratively scarred by her mother while Romeo takes over Dylan's body, a body who was going to sleep with Ariel for a bet.  As Juliet flees Romeo/Dylan, she jumps into the car of Ben and starts to fall for him.  The next day she begins to look for the soulmates she has been sent to help and is horrified to discover that they are Ben and Ariel's mean best friend Gemma.  How is she supposed to get them to fall truly in love AND protect them from Romeo when she feels that Gemma is undeserving of Ben and that she, Juliet, would be a much better match? This might sound confusing but this aspect made perfect sense to me as I read.

Needless to say, there is a lot talk about love in this book. What is love and how do you act when you are in love?  I'll admit that I'm not a big fan of people in high school finding their forever "soulmate" despite the pervasiveness of that idea in YA lit.  But it does connect back to Romeo and Juliet as told by Shakespeare where I believe they're 16 and 13 respectively.  Anyway there's a lot of talk about what love is and isn't and I liked that.

What I didn't like was that Ben had little presence. I understood that Juliet liked him because she talked about it a lot but Ben didn't make an impression on me. If I'm going to root for a romance, I need to be able to feel for both parties and this book failed in that respect.

I was also a little confused by the rules governing the paranormal elements of Romeo and Juliet throughout time. Some explanations are provided (some not soon enough for my taste) but it was a little confusing and I'm still not sure I completely understand. There are also a couple of chapters narrated by Romeo, denoted by a different font, and most of them were really good, drawing me into his state of mind. I did not like his conclusion though.  However I loved the ending for Juliet's narration and its little twist on Shakespeare.