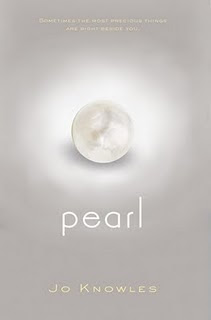 I chose to read this book because it is part of the Contemps challenge; that is also the main reason I finished this book besides its short length because I really didn't like most of the characters.

Bean, born Pearl, lives with her mother and grandfather, the two often at odds. Bean is lonely with a mother, Lexie, who seems indifferent to her and a grandfather, Gus, who tries but can't fill the place of a mother in her heart. Her best friend is Henry, who lives with his mother as his father abandoned them when Henry was young.  After her grandfather suddenly dies, Lexie seems to feel liberated and Bean begins to wonder about her history.

Where to start? I found Bean rather annoying with her mopey and boring self. She was also very melodramatic. There were a couple of times where she was mad at her mom, then they seemed to calm down, and then she was screaming again. I hated those up and down, roller-coaster scenes. I guess a fifteen-year-old can be very dramatic and it's not like Bean has had good examples of personhood from the people around her. But I just didn't like her.

Then it turns out that Lexie is gay, which is why her father hated her, and her best friend Claire has been her girlfriend all these years. As soon as the grandfather dies, Claire is right there, stepping into Bean's life with absolutely no warning to Bean and often acting like an evil stepmother, trying to lay claim to Lexie. Now, Lexie is not a good mother and we've seen no inkling that she has any idea how to parent but it is still baffling to me how she moves Claire in without ever talking to Bean. I'm pretty sure it's a basic rule of parenting that the kid comes first. That's not to say that Lexie doesn't deserve happiness but she is supposed to think of her child at least some of the time. These women were 30 and in many ways they still acted like incredibly immature teenagers. So that's why I hated Lexie and Claire.

At the beginning Gus seems really nice but as the story unfolds we read about his prejudiced reaction to his daughter's queerness, which is full of so much hate. This opens another facet of his personality and helps explain some of Lexie's actions. It doesn't quite explain why Lexie didn't work harder to get away from him permanently.  Another character who I liked at the beginning was Sally, mother of Henry, who I thought was an agoraphobe but who does end up leaving the house easily in support of Bean and then sort of becomes friends with Lexie and Claire.  However she ends up almost collapsing in on herself in another extremely dramatic outburst.

One character I didn't hate was Henry...but that was mostly because he didn't seem to have a personality; he was there but he was easily forgettable.

One last thing I hated was the depiction of An Affair to Remember as some great romantic movie. I happen to think that it is one of the least romantic movies ever and I adore Cary Grant movies as he's my favorite actor and he makes everything better. But not this one. In Affair Deborah Kerr is hit by a car and becomes paralyzed. Instead of telling the man she loves and wants to marry that she's undergone this huge life change, she hides from him. He deserved to know! And if she had told him  right away, and he accepted this change as part of "for better or for worse," then it could have been romantic. Or he could have fled, proving his true colors. But instead she hides from him for months and never displays any intention of telling him until he figures it out! What's romantic about not trusting the person you claim to love to know such a big thing about you? S/he should be able to handle every aspect of you (except for things that are your fault such as cheating). Ugh, I hate that movie.

Overall: Not recommended; definitely my least favorite of the Contemps Challenge.