This Girl Is Different 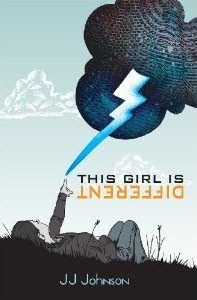 This Girl Is Different by JJ Johnson
Peachtree Publishers, 2011
315 pages
YA; Contemporary
4/5 stars

Evie has been homeschooled for all of her life but this year will be different. She plans to attend public high school for the first time in her life. However she is shocked by the tyranny of teachers and the apathy of students and soon comes up with plans that spin wildly out of control in her attempts to improve the lives of her fellow students.

I really liked Evie; she was a great, principled, ambitious, well-educated character (each chapter opens with a quote, some rather obscure, and throughout the book Evie offers opinions about most of them).  She's not without her faults but she's young yet and she knows that there is still more to learn. I loved following her attempts to fit in at school, however futile, and her discussions with friends and the adults in her life.

She also has two good friends: Jacinda, head cheerleader who initially bands with Evie to try to improve the school but later turns on her, and Rajas, the cute boy who also helps Evie before betraying her.  He was a pretty good interest until his act of treachery and I don't think he redeemed himself enough by the end.

There's also Evie's family, her mother and uncle, who isn't really present in the book. But her mom is a somewhat flaky woman who's immensely supportive of her daughter and involved in her life-yay for a YA parent who cares!  I also really liked the principal of her school who conversed with Evie almost as an equal as well as the teachers despite their various demerits.

I felt like this was one of the smartest books I've read lately with a lot of thought put into critiques of the American high school system and the approach to education as well as to some of the social issues plaguing kids.  I really loved the writing even when Evie seemed a bit too precocious; happily she amply proves that she is young and human throughout the course of the book.