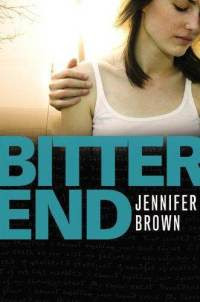 My younger sister actually checked this book out of the library because she likes darker YA. Although she didn't like it, I decided to give it a try because I knew how acclaimed Jennifer Brown's Hate List was.  Well, I should have listened to her.

The relationship between main character Alex and her abusive boyfriend Cole was well-done. Alex is vulnerable and craving love after the death of her mother and the splintering of her family. Cole seems charming and also a product of a broken home, meaning that they seem to understand each other. Cole loves her poetry, she loves his music, and everything seems great. Except of course for my feelings of dread as I knew the book was about an abusive relationship.

Besides the inherent brutality of a physically abusive relationship, which was very hard to read (I may have done some skimming), these kinds of books are hard for me to read because I want to believe that people can change, that mistakes are made but also learned from. But Cole has been an abuser in at least three relationships and seems unlikely to change, which is just so sad to see in a human being. As you may be able to see, I wanted to like Cole because he did have the ability to be very charming even as his true colors were revealed. And he did have make some good points.

Because I agreed with Cole about Alex's friends-they suck. They are immature and annoying. It seemed like they were friends because they had all lived next to each other and had known each other for ages; are proximity and history really good reasons to be friends? Bethany was shockingly nondescript for someone who is supposed to be a best friend. I could not form a picture of her and I would forget about her whenever she wasn't around.

Meanwhile Zach was so annoying, way too flirty, and from what the book showed, obviously in love with Alex. Why was he always trying to tickle and touch her?  Obviously Cole's expression of his uncomfortableness with Zach was taken too far but I would have been uncomfortable with such a flirty relationship between my boyfriend and his female friend.  Additionally Zach finds out early about some of Cole's bad traits but instead of trying to have a sober conversation with Alex, he attempts to threaten Cole and just tells Alex that Cole's a jerk. Nothing to support that accusation and it did make Zach look like the bad guy. I think there's a problem when the reader hates the friends who are supposed to help the abusee more than the actual abuser.

This book just did not work for me; I would recommend Stay by Deb Caletti and especially Dreamland by Sarah Dessen for a superior reading experience (My sister, also agrees with me on these recommendations-so that's two of us urging you to read these other books.)