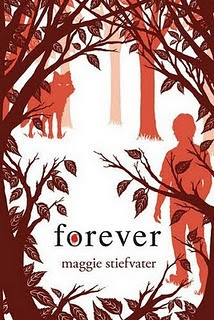 When we left off in Linger, Grace had been turned into a wolf and her love with Sam was seriously threatened by her parents' distaste for Sam. While I had been unsure of Cole and Isabel's narration, given that they hadn't narrated in Shiver, I found that they were very interesting and electrifying, often providing some of the most exciting bits.

Diving in to Forever, it took me some time to become acclimated to Mercy Falls and to what had previously happened. But soon I was back and loving the way everything unfolded. Threads from the earlier books were expanded on: Cole's scientific explorations, Isabel's angry and difficult relationship with her parents, Sam's transformation into a shifting wolf as plotted by Beck, and Grace's fractured relationship with her parents, which was very satisfyingly addressed.  There's also Sam and Grace's relationship-is this forever?  Additionally is the ever-looming specter of a wolf hunt (with helicopters!) led by Isabel's father to for now and forever eradicate the wolves from Mercy Falls.

Despite all of these plots, not much happens in the beginning, which is one of the reasons that I didn't give this book a 5.  Although I could sense that more would be happening, I was impatient for those events. The other reason is the writing. I do love Stiefvater's writing and I think it is of very high-caliber but I sometimes ended up skimming, especially over the poetry that was inserted. One last complaint is the ending; as someone who prefers a definite ending, the ambiguity didn't wholly satisfy me. Others may find it perfect.

Overall: A fine conclusion to the Wolves of Mercy Falls with more of Stiefvater's beguiling writing.