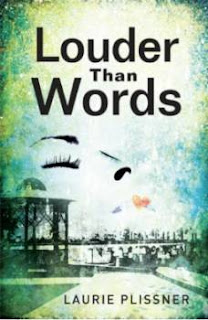 In this case, Sasha has lost her voice after a horrific car accident that killed her parents and sister. The diagnosis is selective mutism based on the traumatic incident and she speaks using a voice box. After four years of therapy, she has basically resigned herself to never speaking again. Until one day she meets Ben, who can read minds and a beautiful relationship is born. With his support (as well as the continued support of her her aunt, uncle, and best friend), Sasha fights for her voice and looks into the possibility that the car accident was no such thing.

One thing that was interesting to me was Ben's ability to read minds. Although Sasha is surprised, she quickly accepts it after he demonstrates and that's that. There isn't an attempt to make this a full-on paranormal or fantasy. It's just one element that sets Ben aside from other people in her life, not a big deal at all. And their relationship is pretty sweet, especially as he challenges her not to accept the life she was planning to accept but to want more. He's hugely supportive as they experiment with ways to reclaim her voice as well as when she investigates the accident site and discovers cryptic notes that reveal there is more to the story of the accident.

I did think the ending was a little rushed. Thankfully all my questions were answered but everything unfolded over just a few pages. We confirm that the accident was purposeful and we learn who and why (hint: the person is somewhat deranged). It just happened so fast.

Content warning: a lot of sexual stuff-I was quite surprised; it may make this book inappropriate for younger readers.

Cover: I'm a self-professed fangirl of covers that feature girls in pretty dresses but I actually really like this one. It's different, feels very arty in an appealing rather than exclusionary.